Omnivore’s Dilemma: How the Book I Never Read Changed My Life

When I first met Rob he was a backpacker.  It was 2004 and I was living and working in Buenos Aires, Argentina.  Rob had made his way there after the first year and a half of his three-year backpacking trip through Central and South America.  He owned a pair of zip-off pants and a coupla t-shirts.  The rest of his backpack was filled with books.  I was intrigued.

He had a lot of time on his hands and a lot of that time was spent reading.  Rob was the first person to pass me Vonnegut and Dostoevsky.  He let me borrow his copy of Nelson Mandela’s Long Walk to Freedom. I think he’s almost forgiven me for writing in the margins.  I’m pretty sure, however, that he hasn’t quite gotten over the fact that I lost his copy of Ishmael . (It’s no longer in print in Spanish!)

I remember reading his well-worn copy of Steinbeck’s The Winter of Our Discontent while standing on the subte on my way from Belgrano to Zona Norte for work.  I would wrap my arm around the metal pole for support, pinky and thumb of my left hand holding the pages in place as my right fist grasped my cafe con leche in its American-sized to-go cup.

Each book that Rob lent me changed me but none in quite as tangible a way as the one I still haven’t finished reading.

In the decade since we moved to Austin from AR, our reading habits have shifted. We devour the news but it takes us much longer to get through a full novel or autobiography. My cooking has also undergone serious revision. Rob has always insisted on cooking everything from scratch–like, even spaghetti sauce. I used canned beans to make chili once and he refused to eat a bite. This was all fine and good when Rob had no job and did all of the cooking. But when we got to Texas, we were both working and started to split the task. In our first years back in the states we had more than one “discussion” about how complicated we wanted to make, or not make, our cooking and eating routines and habits.  I made a lot of salads.

Around the time I had finally learned to make about 4–optimistically, 5–dishes, most involving chicken, Rob came across the book, Omnivore’s Dilemma. Rob is an animal lover who grew up hunting and an environmentalist in his ideology as well as his work.  The book spoke to him, to the self he was when he was young and to the self he was turning out to be.  Little did I know as I watched him flip through those pages that we were about to throw out my new, hard-earned recipes and start from, well… start before scratch.

What do you mean, Rob, that you’re only going to eat the meat that you hunt yourself?  What do you mean that each of my go-to poultry dishes is now, literally, off the table?  The salami-eating city-dweller I met in BsAs is now a vegetarian hunter? Huh?

I grew up in the suburbs of DC. If I met anyone who owned a gun before meeting Rob, I didn’t know about it.  I’ve never shot a gun and don’t have any interest in ever shooting one. To be honest, just typing the words shot, gun, shooting, make me terribly uncomfortable. 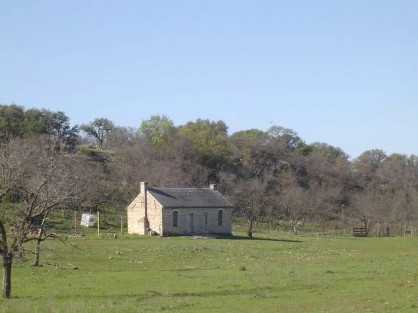 The cabin in Menard, TX.

Under the influence of Michael Pollan, Rob had decided to make our culinary choices more sustainable.  He was going to quit eating meat–except the meat he, himself, hunted or fished.  He already had access to the family’s ranch to hunt deer and turkey and figured that he’d pick his rifle and fishing pole back up.  He’d never enjoyed hunting simply for the sport of it and Pollan had reminded and further educated him on the benefits to our health and to the earth. If we were to eat animals who had enjoyed a life in the wild and to boycott the meat raised in cages, we could eat both hormone and guilt-free.  I had heard these “back to the earth” arguments before. I even had friends who lived according to these convictions. But I didn’t relate to those decisions.  I liked my deli sandwiches and ground beef tacos. And though I had listened with interest to those friends speak of their choices, I certainly hadn’t cooked for anyone who had such dietary restrictions.

I did a lot of huffing and puffing when Rob made this life decision that would affect us both.  I rolled my eyes and ordered beef fajita tacos or steak just about any time we went out.  I refused to cook the venison even though, by the time it got to our freezer, it was processed, packaged, and looked store-bought.

Earlier this month, Rob went to the processor to pick up this year’s kill: two white tailed deer and one axis.  Four years ago when he stocked our freezer in the same manner, I cried. And for those of you who don’t know me that well, I mean I really did cry. There was no more room to store breast milk for Maya or frozen bananas for my shakes.  Where was I going to stash the baby teethers or back-up meals of black beans or chicken soup?

But this year, as Rob labeled and sorted each package of sausage, backstrap, ground venison, and cutlets I asked, “Are you sure this is enough to get us through the year?”

Since Maya was born and I’ve been home more, I’ve taken on even more of the responsibility of cooking and grocery shopping and I have, begrudgingly, learned to cook. Though it’s been a long process, my cooking has become less-processed.  When I want to cook Argentine-style I make venison-filled empanadas.  When we’re in the mood for Asian food, I make vegetarian sushi rolls or spring rolls and venison-packed potstickers or ginger venison stirfry. I cook vegetarian Indian dahl and channa masala (with dry chickpeas, of course :)) and when we want Mediterranean food I make falafel from scratch. 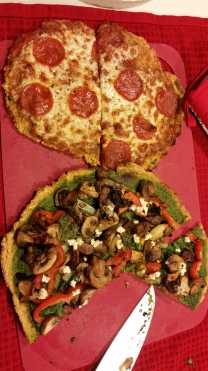 For pizza night, I make the crust with oat flour, pumpkin (canned–sorry, Rob) and chia seeds.  In the past year or two I have even begun to experiment with baking cupcakes, breads, granola bars, or muffins sweetened with beets or honey or dates.

This year, for my birthday, Rob surprised me with a tablet for the kitchen that I’ve been hinting at “needing” to display recipes as I cook.  My best friend, Vicki, sent me and the kids matching superman aprons.  I still don’t consider myself a cook.  Many days, I can’t even bring myself to say that I enjoy cooking. But I have begun to really appreciate eating a well-prepared meal and having a good idea of where the ingredients came from.  Maybe this holiday break I’ll take the time to finish Omnivore’s Dilemma or another of Michael Pollan’s books like Cooked.

While I don’t think I’ll ever be one of those people who strays from my measuring cups  to create my own concoctions, I look forward to trying new recipes and to writing and posting about them here. Maybe it’s through writing and sharing that I will begin to identify as a cook who loves the process–or at least loves to write about it.

I am a mother, writer, teacher, and educator who sees each of those roles as an opportunity to be an agent of change working for a more equitable world. View all posts by Katie McKay

One thought on “Omnivore’s Dilemma: How the Book I Never Read Changed My Life”